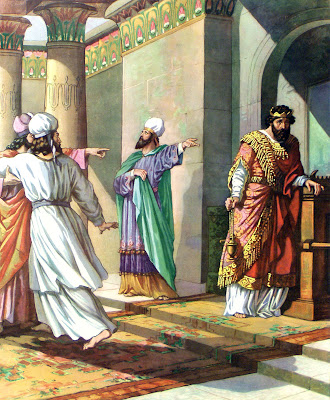 Hello friends, the following is evidence of King Uzziah, who was a righteous king, and was also influenced positively by the prophet Zechariah.
Towards the end of Uzziah's reign he became very powerful and his heart was lifted up, leading to his destruction. He was struck with leprosy towards the end of his reign.
It's good to always be humble, because It Is The Lord Who Gives, and without Him, there isn't really anything we can do, as we are just human beings with a very short time span to live on earth. (Credit given at the bottom of each article :D)

2 When pride cometh, then cometh shame: but with the lowly is wisdom.

26 Then all the people of Judah took Uzziah, who was sixteen years old, and made him king in the room of his father Amaziah.
2 He built Eloth, and restored it to Judah, after that the king slept with his fathers.
3 Sixteen years old was Uzziah when he began to reign, and he reigned fifty and two years in Jerusalem. His mother's name also was Jecoliah of Jerusalem.
4 And he did that which was right in the sight of the Lord, according to all that his father Amaziah did.
5 And he sought God in the days of Zechariah, who had understanding in the visions of God: and as long as he sought the Lord, God made him to prosper.
6 And he went forth and warred against the Philistines, and brake down the wall of Gath, and the wall of Jabneh, and the wall of Ashdod, and built cities about Ashdod, and among the Philistines.
7 And God helped him against the Philistines, and against the Arabians that dwelt in Gurbaal, and the Mehunims.
8 And the Ammonites gave gifts to Uzziah: and his name spread abroad even to the entering in of Egypt; for he strengthened himself exceedingly.
9 Moreover Uzziah built towers in Jerusalem at the corner gate, and at the valley gate, and at the turning of the wall, and fortified them.
10 Also he built towers in the desert, and digged many wells: for he had much cattle, both in the low country, and in the plains: husbandmen also, and vine dressers in the mountains, and in Carmel: for he loved husbandry.
11 Moreover Uzziah had an host of fighting men, that went out to war by bands, according to the number of their account by the hand of Jeiel the scribe and Maaseiah the ruler, under the hand of Hananiah, one of the king's captains.
12 The whole number of the chief of the fathers of the mighty men of valour were two thousand and six hundred.
13 And under their hand was an army, three hundred thousand and seven thousand and five hundred, that made war with mighty power, to help the king against the enemy.
14 And Uzziah prepared for them throughout all the host shields, and spears, and helmets, and habergeons, and bows, and slings to cast stones.
15 And he made in Jerusalem engines, invented by cunning men, to be on the towers and upon the bulwarks, to shoot arrows and great stones withal. And his name spread far abroad; for he was marvellously helped, till he was strong.
16 But when he was strong, his heart was lifted up to his destruction: for he transgressed against the Lord his God, and went into the temple of the Lord to burn incense upon the altar of incense.
17 And Azariah the priest went in after him, and with him fourscore priests of theLord, that were valiant men:
18 And they withstood Uzziah the king, and said unto him, It appertaineth not unto thee, Uzziah, to burn incense unto the Lord, but to the priests the sons of Aaron, that are consecrated to burn incense: go out of the sanctuary; for thou hast trespassed; neither shall it be for thine honour from the Lord God.
19 Then Uzziah was wroth, and had a censer in his hand to burn incense: and while he was wroth with the priests, the leprosy even rose up in his forehead before the priests in the house of the Lord, from beside the incense altar.
20 And Azariah the chief priest, and all the priests, looked upon him, and, behold, he was leprous in his forehead, and they thrust him out from thence; yea, himself hasted also to go out, because the Lord had smitten him.
21 And Uzziah the king was a leper unto the day of his death, and dwelt in a several house, being a leper; for he was cut off from the house of the Lord: and Jotham his son was over the king's house, judging the people of the land.
22 Now the rest of the acts of Uzziah, first and last, did Isaiah the prophet, the son of Amoz, write.
23 So Uzziah slept with his fathers, and they buried him with his fathers in the field of the burial which belonged to the kings; for they said, He is a leper: and Jotham his son reigned in his stead.

In 1931 the Uzziah Tablet was discovered in 1931 Jerusalem by Professor E.L. Sukenik of the Hebrew University of Jerusalem. He noticed an artifact at a Russian convent located on the Mount of Olives. The inscription on the tablet is translated, "Hither were brought the bones of Uzziah, king of Judah. Not to be opened."

Uzziah was the 11th king of Judah and he lived during a time when Assyria and Egypt were in sort of a decline. He was able to bring great prosperity to the land, and to restore much of the glory of Judah. Uzziah reestablished the port at the northern head of the Red Sea known as Ezion-geber. He also brought control to the trade markets, and brought into subjectio n some of the former enemies, Edom, Philistia, and Arabia. He initiated many building projects, and he brought security into the nation. But according to the Bible Uzziah allowed his pride to lead him into burning incense in the Temple, which only the priests were authorized to do, and he was struck with leprosy for this sin. He retired from public life and gave control of his kingdom into the hands of a son Jotham. It is interesting that Isaiah chapter 6 reveals Isaiah's vision of the Lord on his throne, that this was during the time King Uzziah had died. It is as though God wanted to reveal the message to his people that even though Uzziah had died and things seemed out of control, God was still on his throne.

Isaiah 6:1 "In the year that king Uzziah died I saw also the Lord sitting upon a throne, high and lifted up, and his train filled the temple."

The Bible mentions Uzziah or Azariah as the king of the southern kingdom of Judah in 2 Kings 15. The Uzziah Tablet Inscription is a stone tablet (35 cm high x 34 cm wide x 6 cm deep) with letters inscribed in ancient Hebrew text with an Aramaic style of writing, which dates to around 30-70 AD. The text reveals the burial site of Uzziah of Judah, who died in 747 BC. The inscription on the ossuary tombstone reads:

The Uzziah Tablet Inscription was discovered in Jerusalem in 1931 by Professor. E. I. Sukenik of the Hebrew University of Jerusalem and is now in the Israel Museum in Jerusalem. The Uzziah Tablet is an important discovery in the study of Biblical Archaeology because it mentions one of the kings of Judah, and the Jewish authorities would not have crafted such a piece unless there was an original work to draw from. It is interesting that the Tiglath-pileser inscription mentions Uzziah four times (Azariah the Judean). Tiglath-pileser was the Assyrian ruler who deported the Jews of the northern kingdom of Israel away into captivity.

In 1931 an archeological find, now known as the Uzziah Tablet, was discovered by Professor E.L. Sukenik of the Hebrew University of Jerusalem. He came across the artifact in a Russian convent collection from the Mount of Olives. The origin of the tablet previous to this remains unknown and was not documented by the convent. The inscription on the tablet is written in ancient Hebrew with an Aramaic style. This style is dated to around AD 30-70, around 700 years after the supposed death of Uzziah of 2 Kings and 2 Chronicles. Nevertheless the inscription is translated, "Hither were brought the bones of Uzziah, king of Judah. Not to be opened." It is open to debate whether this tablet really was part of the tomb of King Uzziah or simply a later creation. It may be that there was a later reburial of Uzziah here after the Second Temple Period. [Wikipedia]

Uzziah (strength of Jehovah). King of Judah B.C. 809-8 to 757-6. In some passages his name appears in the lengthened form Azariah: After the murder of Amaziah, his son Uzziah was chosen by the people, at the age of sixteen, to occupy the vacant throne; and for the greater part of his long reign of fifty-two years he lived in the fear of God, and showed himself a wise, active and pious ruler. He never deserted the worship of the true God, and was much influenced by Zechariah, a prophet who is mentioned only in connection with him. 2Ch 26:5 So the southern kingdom was raised to a condition of prosperity which it had not known since the death of Solomon. The end of Uzziah was less prosperous than his beginning. Elated with his splendid career, he determined to burn incense on the altar of God, but was opposed by the high priest Azariah and eighty others. See Ex 30:7,8; Nu 16:40; 18:7 The king was enraged at their resistance, and, as he pressed forward with his censer was suddenly smitten with leprosy. This lawless attempt to burn incense was the only exception to the excellence of his administration. 2Ch 27:2 Uzziah was buried "with his fathers," yet apparently not actually in the royal sepulchres. 2Ch 26:23 During his reign a great earthquake occurred. Am 1:1; Zec 14:5 [Smith's Bible Dictionary]

Source: http://www.bible-history.com/archaeology/israel/uzziah-tablet.html
Posted by Unknown at 6:24 AM