Theomatics, The Math of God 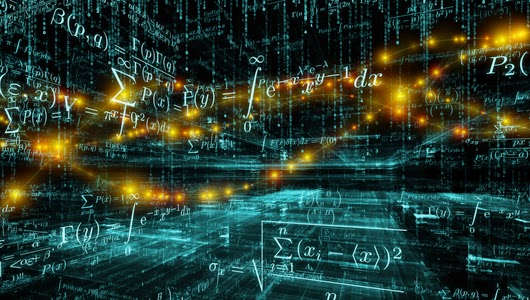 Hello friends, This is quite an astonishing find, and regardless of how smart you are, this discovery will bedazzle you!
It is basically, mathematical proof that The Bible was written by an incredibly superior intelligence, in essence, God.
I must note that there is a counterfeit system that is extremely popular called, "ELS Bible Code" this system is based on random chance and i believe it was "discovered" in order to keep the real discovery hidden, which is Theomatics.
(The Bible is the only book in existence with this phenomenon!)
I see this phenomenon as sort of a Watermark, an extremely unique Watermark.
Remember that our Lord Jesus Christ Is The Only Way to The Father!

I will now post the introduction for it with 2 links at the bottom with a quick explanation and a more thorough one (Credit given at the bottom :D)

Click the link above for the full story including recorded events in which some of the best Mathematicians in the United States were challenged to disprove the numbers given in Theomatics.
One of them converted and seeked The Lord Jesus Christ after being unable to disprove the evidence.
(He was an atheist prior to challenging the numbers)

The Original Code in the Bible

"A hierarchy of theological aspects is hard to imagine.

The one factor that separates theomatics from everything else out there is very simply this. The data proving this concept can be demonstrated in a scientific laboratory. In other words, it is 100% conclusive. What you are about to witness is objective fact—not somebody’s religious ideas or philosophical bias. If the time ever comes that theomatics is independently verified by the scientific community, and also recognized by the world's media, this discovery would probably go down in history as the greatest single event (and baffling mystery to most people) of all time. Again, what could be more significant than: (1) the absolute scientific proof that Creator of the universe—personally—wrote the Bible. And then, (2) to be able and understand the hidden message that comes straight from the very heart and mind of that Creator? Nothing. Absolutely nothing, could top that.
Yet the sovereign God will probably never allow that degree of universal acceptance to ever take place (you will understand why later in this presentation). Even though anyone with a logical brain can easily see and verify this undeniable proof—right before their very eyes—it is our prediction that the God of heaven, will deliberately blind and block anyone who is skeptical and LACKS HONEST FAITH, from ever believing or comprehending its significance (see Chapter 3e entitled Higher than the Heavens, and also Chapter 10a on Entering Heaven's Gate).
Right now the skeptics have no genuine interest in this subject, and when they do hear about it, the whole thing seems strange and bizarre—they mock it as being ridiculous nonsense and are completely cynical, finding it just too "unbelievable" to even investigate. A few so called Christians and atheists have made an attempt and set up websites deliberately trying to debunk it. In studying those sites, it is obvious they are almost totally subjective in their analysis, or use a completely false pretense and premise, and have no real understanding of what they are even talking about—they either ignore or skirt around the objective data and/or apply a testing method that is totally irrelevant to the facts (see www.theomatics.net).
Yet the data you are about to witness is mathematically impossible to occur and 100% inpenetrable by the skeptics. There is no way they can statistically prove that the data is random and the results arbitrarily selected from someone "picking and choosing" from random numbers (which would be the only possible explanation if theomatics was untrue).
It has been proven time and time again that the odds of this happening by chance, on even the most simple and basic theomatic patterns in the Bible, is millions and billions to one (after every mathematical possibility has been exhausted by computer). The definitions are clearly definable and the parameters for all mathematical possibilities can be set in stone—there is no possible wiggle room left (picking and choosing the results, i.e. showing what does work but ignoring the failures).
This phenomenon defies all mathematical laws and axioms. Supernatural and divine intelligence is the only possible explanation for it.
It is now time to begin explaining this discovery.
Two versions will be shown. One will be a very short and brief explanation that does not get involved in a lot of detail. The other is the more complete version that explains the subject comprehensively. You can view the short version first and move on through the website, coming back later to study the longer version if you are so inspired. Or if you are a person who wants to know all the facts and nitty gritty details, you can start with the longer version.
Short Version Shown HERE
Long Version Shown HERE
Back to Angelfall Map Page
Source: http://angelfall.com/pages/2a.php
Posted by Unknown at 12:41 AM