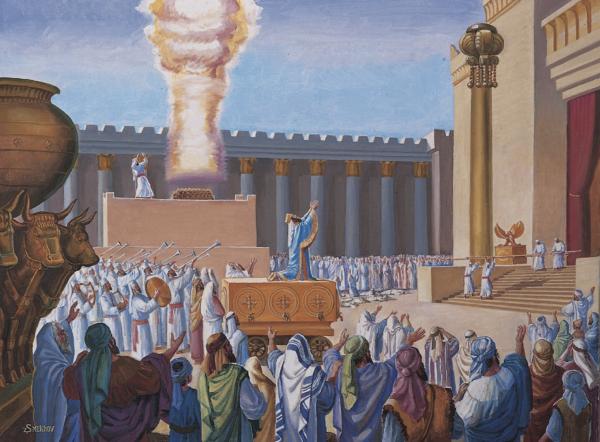 Hello friends, here we have The House of YAHWEH Ostracon. It not only has our Lord's Name written on it, but according to the date it would seem to to point us to Solomon's Temple (Credit given at the bottom of the article :D)

An ostracon, or potsherd with writing on it, mentioning the “House of Yahweh” was recently published (Bordreuil, Israel and Pardee 1997). It was acquired on the antiquities market and is now in the hands of a private collector.

Based on the style of writing, experts date the inscription to the seventh century BC. The House of Yahweh referred to would have been the Temple erected by Solomon in the 10th century BC and destroyed by the Babylonians in 586 BC.

Pursuant to the order to you of Ashyahu the king to give by the hand of Zecharyahu silver of Tarshish to the House of Yahweh. Three shekels.

The document appears to be a receipt for a contribution of 3 shekels (a little over 1 oz) of silver to the Jerusalem Temple. Every Israelite was required to pay a yearly Temple tax of 1/2 shekel (Ex 30:13). Perhaps our text records the payment of the yearly tax for six individuals.

There are two personal names in the inscription, both of which end in the theophoric element yahu, an abbreviated form of the divine name Yahweh. The first personal name is that of a king, Ashyahu, “given of Yahweh.” Based on the dating of the ostracon, the most likely candidate would be Josiah, whose name means the same, although spelled slightly different in the Old Testament. Ostracon recording a contribution to the House of Yahweh.

The most significant aspect of the inscription is the mention of the “House of Yahweh.” This phrase is used often in the Old Testament in reference to Solomon’s Temple. Two

other inscriptions are known that have this phrase: an ivory pomegranate, where the phrase had to be reconstructed (Wood 1991), and a letter from the Israelite fortress at Arad (Albright 1969:569). The ivory pomegranate is dated to the mid-eighth century BC, and the Arad letter to the early 6th century BC. There is no word divider between “House” and “Yahweh” in the inscription, indicating that the words were closely associated and considered to be one unit. Similarly, the phrase “House of David” in the Tel Dan inscription is written without a word divider (Wood 1993). The new ostracon lends credence to the interpretation of the phrase in the Tel Dan inscription as “House of David” rather than a place name as some critics have maintained.