Hello friends! The following is further evidence of King Solomon. It is said that these walls were built by King Solomon, the wisest king of The Old Testament (Credit given at the bottom of each article :D)

25 These are also proverbs of Solomon, which the men of Hezekiah king of Judah copied out.
2 It is the glory of God to conceal a thing: but the honour of kings is to search out a matter.
3 The heaven for height, and the earth for depth, and the heart of kings is unsearchable.
4 Take away the dross from the silver, and there shall come forth a vessel for the finer.
5 Take away the wicked from before the king, and his throne shall be established in righteousness.
6 Put not forth thyself in the presence of the king, and stand not in the place of great men:
7 For better it is that it be said unto thee, Come up hither; than that thou shouldest be put lower in the presence of the prince whom thine eyes have seen.
8 Go not forth hastily to strive, lest thou know not what to do in the end thereof, when thy neighbour hath put thee to shame.
9 Debate thy cause with thy neighbour himself; and discover not a secret to another:
10 Lest he that heareth it put thee to shame, and thine infamy turn not away.
11 A word fitly spoken is like apples of gold in pictures of silver.
12 As an earring of gold, and an ornament of fine gold, so is a wise reprover upon an obedient ear.
13 As the cold of snow in the time of harvest, so is a faithful messenger to them that send him: for he refresheth the soul of his masters.
14 Whoso boasteth himself of a false gift is like clouds and wind without rain.
15 By long forbearing is a prince persuaded, and a soft tongue breaketh the bone.
16 Hast thou found honey? eat so much as is sufficient for thee, lest thou be filled therewith, and vomit it.
17 Withdraw thy foot from thy neighbour's house; lest he be weary of thee, and so hate thee.
18 A man that beareth false witness against his neighbour is a maul, and a sword, and a sharp arrow.
19 Confidence in an unfaithful man in time of trouble is like a broken tooth, and a foot out of joint.
20 As he that taketh away a garment in cold weather, and as vinegar upon nitre, so is he that singeth songs to an heavy heart.
21 If thine enemy be hungry, give him bread to eat; and if he be thirsty, give him water to drink:
22 For thou shalt heap coals of fire upon his head, and the Lord shall reward thee.
23 The north wind driveth away rain: so doth an angry countenance a backbiting tongue.
24 It is better to dwell in the corner of the housetop, than with a brawling woman and in a wide house.
25 As cold waters to a thirsty soul, so is good news from a far country.
26 A righteous man falling down before the wicked is as a troubled fountain, and a corrupt spring.
27 It is not good to eat much honey: so for men to search their own glory is not glory.
28 He that hath no rule over his own spirit is like a city that is broken down, and without walls.

A section of a wall built in Solomon's day around 950 BC was found south of the Temple Mount on the Ophel. The remains of the excavated wall are 19.6 feet high and 230 feet long. Found along with the portion of Solomon’s wall were a gatehouse that led into the royal district of the city. The gate is built in the typical style used by Solomon and his builders at Megiddo, Beersheba and Ashdod, with four symmetrical rooms, two on each side of the passageway through the gate.

A 78 by 59 foot tower in the wall overlooking the Kidron Valley is located under the road that runs along the Ophel. Two earthenware jars, almost four feet tall, were also found from the time of Solomon. One jar handle was marked with the inscription: "For the King." King Solomon would have built his royal palace north of his father David’s palace further up the Ophel. This would later be called the “upper house of the king” by Nehemiah 3:25. The city wall would have been expanded north. This is that wall. Walls built by Solomon north of David's Palace of Cedar (2 Samuel 5:11) and Solomon's Palace of the Forest of Lebanon (1 Kings 7:2), on the Ophel just south of the Temple Mount on Mount Moriah. It took Solomon thirteen years, however, to complete the construction of his palace.

He built the Palace of the Forest of Lebanon a hundredcubits long (150 feet), fifty wide (75 feet) and thirty high (45 feet), with four rows of cedar columns supporting trimmed cedar beams. It was roofed with cedar above the beams that rested on the columns—forty-five beams, fifteen to a row. Its windows were placed high in sets of three, facing each other. All the doorways had rectangular frames; they were in the front part in sets of three, facing each other.

He made a colonnade fifty cubits long and thirty wide. In front of it was a portico, and in front of that were pillars and an overhanging roof.

He built the throne hall, the Hall of Justice, where he was to judge, and he covered it with cedar from floor to ceiling. And the palace in which he
was to live, set farther back, was similar in design. Solomon also made a palace like this hall for Pharaoh's daughter, whom he had married. All these structures, from the outside to the great courtyard and from foundation to eaves, were made of blocks of high-grade stone cut to size and trimmed with a saw on their inner and outer faces. The foundations were laid with large stones of good quality, some measuring ten cubits and some eight. Above were high-grade stones, cut to size, and cedar beams. The great courtyard was surrounded by a wall of three courses of dressed stone and one course of trimmed cedar beams, as was the inner courtyard of the temple of the Lord with its portico. - 1 Kings 7:1-12

These walls expanded the City of David to the north. Solomon’s building projects around his palace complex would have required the opening of the northern wall,
leaving a breach. As mentioned before, David may have built his own palace just on the outside of the old north wall of the Jebusite city that had enclosed
their fortress or stronghold. The book of 1 Kings also records Solomon rebuilding this northern wall which would have included him extending the wall further to
the north to include his new palace and thus closing up this breach in the wall made for the many years of construction in this area of the
city on the Ophel. This is the wall recently excavated and seen in the photos. Solomon had built the supporting terraces (Millo) and had filled in the gap in the wall of the city of David his father. - 1 Kings 11:27 These are Solomon's walls built to extend the city to the north around his Palace of the Forest of Lebanon around the year 950. Solomon began to reign in 970.
He spent 7 years building the Temple and 13 years building his palace. At the end of these 20 years of building (950 BC), Solomon would have closed up the
gap in the north wall that was created by all of his construction work. These are the walls he built.

Click image for a chart identifying the lettered sites.

Even as Muslim spokesmen try to deny Jewish claims to the Holy Land, archaeological discoveries have recently been coming in fast and furious proving the veracity of the Biblical account of history.
Hebrew University archaeologists have revealed an ancient path in Jerusalem believed to date back to the time of King Solomon, along with structures including a gateway and the foundation of a building. Dr. Eilat Mazar, the leader of the archaeological dig, said the findings match finds from the time of the First Temple.
Arutz Sheva TV's Yoni Kempinski visited the archaeological dig where the ancient wall was revealed and heard from Dr. Mazar about the importance of the find and its connection to the Biblical description about the time of King Solomon.

The latest find includes a 70-meter long and six-meter-high stone wall, a small house adjacent to a gateway leading to what was once the royal courtyard, a building that served city officials, and a tower that overlooked the Kidron river.
According to Mazar, the wall is likely to be the wall built by King Solomon. "This is the first time a building has been found that matches descriptions of the building carried out by King Solomon in Jerusalem," she said.
The third chapter of the Biblical book of Kings describes King Solomon building "his own house, and the house of the Lord, and the wall of Jerusalem round about." The wall testifies to relatively advanced engineering capabilities, archaeologists said. It runs through historic Jerusalem, between the City of David and the Temple Mount. 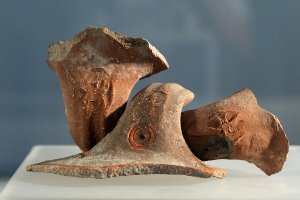 The remnants of a public building discovered along the wall contained shards of pottery that allowed researchers to estimate the date at which the building was in use – the 10th century BCE. One of the shards was engraved with Hebrew writing saying "For the chief...." Mazar believes the shard, part of a jug, belonged to the royal baker.
Other jugs bore a seal saying "For the king" in Hebrew. Dozens of seals were discovered using a water sifting technique. The building was ravaged by fire, researchers said, but the jugs that were found at the site were the largest discovered in Jerusalem to date.

The discoveries were made during a months-long dig run by Hebrew University in cooperation with the Israel Antiquities Authority, East Jerusalem Development Ltd, and the Israel Nature and Parks Authority. The dig is sponsored by Daniel Mintz and Meredith Berkman of New York.

Source: http://www.tedmontgomery.com/remarks/10.1-6/Solomon/SolomonConstruction.html
Posted by Unknown at 5:21 AM