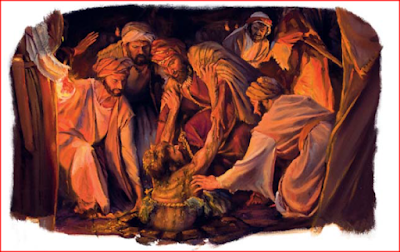 Hello friends! The following is evidence of 2 of Jeremiah's Captors. Jehucal son of Shelemiah and Gedaliah son of Pashur—ministers of the king of Judah who had the prophet thrown into a cistern because they did not like the message he was preaching to the people of Jerusalem about surrendering to the Babylonians (Credit given at the bottom of the article :D)
Jehucal's name is written as, "Jucal" in the King James version of the Bible, Jehukal in the New International version, and Jehucal in the New Living translation.

38 Then Shephatiah the son of Mattan, and Gedaliah the son of Pashur, and Jucal the son of Shelemiah, and Pashur the son of Malchiah, heard the words that Jeremiah had spoken unto all the people, saying,
2 Thus saith the Lord, He that remaineth in this city shall die by the sword, by the famine, and by the pestilence: but he that goeth forth to the Chaldeans shall live; for he shall have his life for a prey, and shall live.
3 Thus saith the Lord, This city shall surely be given into the hand of the king of Babylon's army, which shall take it.
4 Therefore the princes said unto the king, We beseech thee, let this man be put to death: for thus he weakeneth the hands of the men of war that remain in this city, and the hands of all the people, in speaking such words unto them: for this man seeketh not the welfare of this people, but the hurt.
5 Then Zedekiah the king said, Behold, he is in your hand: for the king is not he that can do any thing against you.
6 Then took they Jeremiah, and cast him into the dungeon of Malchiah the son of Hammelech, that was in the court of the prison: and they let down Jeremiah with cords. And in the dungeon there was no water, but mire: so Jeremiah sunk in the mire.
7 Now when Ebedmelech the Ethiopian, one of the eunuchs which was in the king's house, heard that they had put Jeremiah in the dungeon; the king then sitting in the gate of Benjamin;
8 Ebedmelech went forth out of the king's house, and spake to the king saying,
9 My lord the king, these men have done evil in all that they have done to Jeremiah the prophet, whom they have cast into the dungeon; and he is like to die for hunger in the place where he is: for there is no more bread in the city.
10 Then the king commanded Ebedmelech the Ethiopian, saying, Take from hence thirty men with thee, and take up Jeremiah the prophet out of the dungeon, before he die.
11 So Ebedmelech took the men with him, and went into the house of the king under the treasury, and took thence old cast clouts and old rotten rags, and let them down by cords into the dungeon to Jeremiah.
12 And Ebedmelech the Ethiopian said unto Jeremiah, Put now these old cast clouts and rotten rags under thine armholes under the cords. And Jeremiah did so.
13 So they drew up Jeremiah with cords, and took him up out of the dungeon: and Jeremiah remained in the court of the prison.
14 Then Zedekiah the king sent, and took Jeremiah the prophet unto him into the third entry that is in the house of the Lord: and the king said unto Jeremiah, I will ask thee a thing; hide nothing from me.
15 Then Jeremiah said unto Zedekiah, If I declare it unto thee, wilt thou not surely put me to death? and if I give thee counsel, wilt thou not hearken unto me?
16 So Zedekiah the king sware secretly unto Jeremiah, saying, As the Lord liveth, that made us this soul, I will not put thee to death, neither will I give thee into the hand of these men that seek thy life.
17 Then said Jeremiah unto Zedekiah, Thus saith the Lord, the God of hosts, the God of Israel; If thou wilt assuredly go forth unto the king of Babylon's princes, then thy soul shall live, and this city shall not be burned with fire; and thou shalt live, and thine house:
18 But if thou wilt not go forth to the king of Babylon's princes, then shall this city be given into the hand of the Chaldeans, and they shall burn it with fire, and thou shalt not escape out of their hand.
19 And Zedekiah the king said unto Jeremiah, I am afraid of the Jews that are fallen to the Chaldeans, lest they deliver me into their hand, and they mock me.
20 But Jeremiah said, They shall not deliver thee. Obey, I beseech thee, the voice of the Lord, which I speak unto thee: so it shall be well unto thee, and thy soul shall live.
21 But if thou refuse to go forth, this is the word that the Lord hath shewed me:
22 And, behold, all the women that are left in the king of Judah's house shall be brought forth to the king of Babylon's princes, and those women shall say, Thy friends have set thee on, and have prevailed against thee: thy feet are sunk in the mire, and they are turned away back.
23 So they shall bring out all thy wives and thy children to the Chaldeans: and thou shalt not escape out of their hand, but shalt be taken by the hand of the king of Babylon: and thou shalt cause this city to be burned with fire.
24 Then said Zedekiah unto Jeremiah, Let no man know of these words, and thou shalt not die.
25 But if the princes hear that I have talked with thee, and they come unto thee, and say unto thee, Declare unto us now what thou hast said unto the king, hide it not from us, and we will not put thee to death; also what the king said unto thee:
26 Then thou shalt say unto them, I presented my supplication before the king, that he would not cause me to return to Jonathan's house, to die there.
27 Then came all the princes unto Jeremiah, and asked him: and he told them according to all these words that the king had commanded. So they left off speaking with him; for the matter was not perceived.
28 So Jeremiah abode in the court of the prison until the day that Jerusalem was taken: and he was there when Jerusalem was taken.

It was an epic decision. For years Judah’s king had been caught in the middle of a bitter struggle between a brave, faith-filled prophet and a cabal of ambitious princes. Now the Babylonian army was closing in. Judah’s princes did not want to surrender. But the Prophet Jeremiah defied them. He warned that Jerusalem would go into captivity, and only those who surrendered would live. The king had to choose. Should he heed the prophet’s counsel, surrender Jerusalem and save his people? Or should he capitulate to his princes and kill the prophet? Judah’s fate rested on his verdict.

This gripping story is found in the book of Jeremiah, Chapter 38. Prominent in this account are two of Jeremiah’s worst persecutors: Jehucal, son of Shelemiah, and Gedaliah, son of Pashur. What if tangible evidence of these princes existed? It would corroborate Jeremiah’s account—and be colossal proof of the accuracy of the Bible.

In 2005, archaeologist Dr. Eilat Mazar, on behalf of the Hebrew University of Jerusalem, was digging into the northern section of the City of David when one of her colleagues spotted a small piece of clay lying in the dust. It had originally been made to seal a cord tied around a papyrus scroll. The tiny bulla bore a three-line Paleo-Hebrew inscription: “Belonging to Yehucal, son of Shelemiyahu, son of Shovi.” This was the seal of Jehucal.

Just a few years later in 2008, Eilat Mazar discovered a bulla bearing Gedaliah’s name below the walls of the Old City Jerusalem, near the Dung Gate—just yards away from where the Jehucal bulla was discovered. Dated to the 6th century BC, it reads: “Gedaliah son of Pashur.”

Significance:
Confirms the accuracy of the Biblical record, even down to the name of members of the royal court.
We have an impression of the seal belonging to one of the men who attempted to kill Jeremiah the prophet.