Hello friends! :D the following is evidence of Balaam.
This is quite a discovery that dates back to Moses' time. These writings were found in 1967!
Balaam was once a prophet Of God, but was later driven by greed and chose to mislead the chosen people of Israel into doing all sorts of abominations. This betrayal was his own doom.

10 For the love of money is the root of all evil: which while some coveted after, they have erred from the faith, and pierced themselves through with many sorrows.

I will now show you two articles on the findings :)
(Credit given at the bottom of each :D) 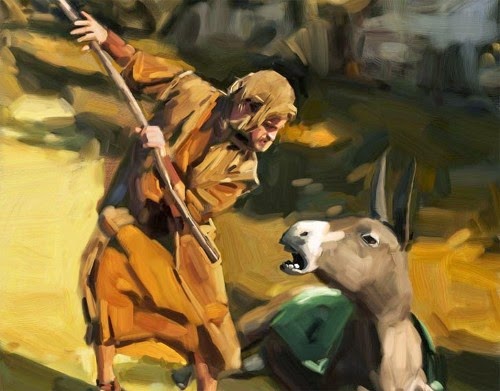 It is probably one of the greatest finds of all time and, by the bizarre rules of biblical archeology, it’s also one of the least reported. Basically, in 1967, in Deir Alla, Jordan,
Dutch archeologists discovered some kind of pagan house of worship or seminary. On its walls, there was a 2,800-year-old inscription in black ink. Key phrases are highlighted in red ink and the whole writing is framed in red. First of all, this is the oldest Aramaic inscription ever found. But if that’s not enough to make it a world-headline, the inscription is 600-800 years older than the Dead-Sea Scrolls. And if that’s not enough to merit international attention, the inscription mentions a prophet, or “seer”, named “Balaam son of Beor”. This is the exact name mentioned in the Torah/Bible (Numbers 22:2–24:25). This is the only instance where a specific individual mentioned in the story of the biblical Exodus can be pointed to in archeology. So who is Balaam, and where is this inscription now? 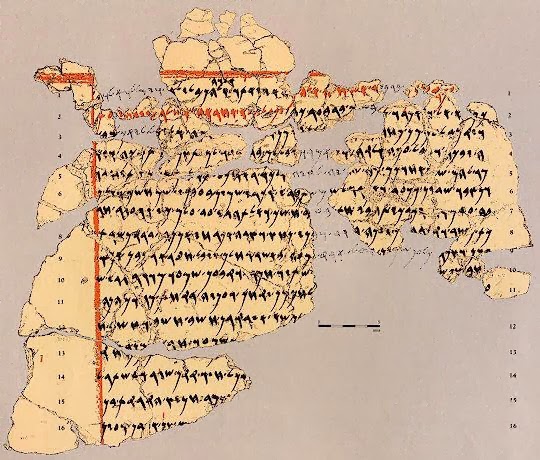 Balaam is the bad guy of the Torah. He is the Darth Vader of the biblical Exodus. According to the Talmud, Balaam had the potential to be Moses, but he turned to the dark side (Av. Zar. 4a–b; Sanh. 105b; Avot 5:19). In a famous incident, as the Israelites are about to enter the promised land, Balak King of Moab asks Balaam to curse the children of Israel. Balaam is unable to do so. The Talmud explains that he looked at the Israelite tents and saw an amazing thing. The tents were rotated so that people could not see into each other’s bedrooms, so to speak. At that point, Balaam realized that the only way to weaken Israel was to corrupt them through sex.

According to the biblical narrative, Balaam was in charge of sex priestesses made up of Moabite and Midianite women. These women successfully seduced the Israelites in an orgy of sex and idolatry (Numbers 31:8, 16). 24,000 Israelite men were punished by God with death. At one point, the Israelite prince, Zimri son of Salu, publically fornicated with a Midianite princess named Cozbi, daughter of Zur, in the name of some kind of fertility rite. Apparently, these rituals were drawing big crowds until Phinehas son of Eleazar, son of Aaron the High Priest (brother of Moses), picked up a spear and killed Zimri and Cozbi with one thrust while they were, so to speak, thrusting. This act ended Balaam’s attempt to subvert Israel through pagan sex (Numbers 25; 6-15). According to the book of Joshua, Joshua took revenge by killing Balaam during the Israelite conquest of Canaan (Joshua, 13:22). So here you have a perfect synchronicity between the story in the Bible and the story that archeologists have discovered in a pagan temple in Jordan. But except for a few scholars, very few people have even heard of this discovery. More than this, the inscription has been removed from Deir Alla and put in drawers – I’m not kidding, drawers – in the Archeological Museum of Amman, capital of Jordan. Meaning, you could be standing right next to the greatest archeological match to the Bible and not know it. The ultimate irony: in the Archeological Museum of Amman, they have a fragment of the Dead-Sea Scrolls. It is a quote from the Bible – the story of Balaam! So the amazing thing is that about 20 feet from each other are the Deir Alla inscription and the Dead-Sea Scroll, both quoting the exact same story – and both matching the Bible perfectly.

Isn’t it incredible? You don’t have to go into the realm of “DaVinci Code” style fiction to discover biblical cover-ups. They’re happening as I write – and it’s not fiction, it’s all too real.

In the country of Jordan, at an excavation site known as Deir 'Alla, fragments of a text from the prophet Balaam were found which date back to at least 800 years before Christ.
The discovery consists of 119 broken plaster fragments inscribed with an ancient text written in the Aramaic language. One of the fragments is inscribed with the words "Warnings given by Balaam, the son of Beor. A seer of the gods."
Also included in the text is the Aramaic word "Shadday", which translated into English is "theAlmighty". This is consistent with Balaam's oracles given in the Old Testament. The Book of Numbers chapter 24:3-4 says "The utterance of Balaam the son of Beor, The utterance of the man whose eyes are opened, The utterance of him who hears the words of God, Who sees the vision of the Almighty, Who falls down with eyes wide open."


The present day country of Jordan where the inscription was found, was known as Moab at the time of Balaam. This backs up the biblical account found in Numbers 22-24, in which the King of Moab sends the elders of Midian before Balaam and offers him money to curse the children of Israel. Instead of cursing the children of Israel, the Spirit of God came upon Balaam and he blessed them.
Greed eventually overcame Balaam and the following events then occurred as recorded in Numbers 25:1-3,9: "Now Israel remained in Acacia Grove, and the people began to commit harlotry with the women of Moab. They invited the people to the sacrifices of their gods, and the people ate and bowed down to their gods.
So Israel was joined to Baal of Peor, and the anger of the LORD was aroused against Israel....... And those who died in the plague were twenty-four thousand."
The bible states in Numbers 31:16 that Balaam was the one who devised the plan to cause Israel to sin in exchange for money from the Midianites:
"Look, these women caused the children of Israel, through the counsel of Balaam, to trespass against the LORD in the incident of Peor, and there was a plague among the congregation of the LORD.


The reason for God's great anger against Israel is recorded in Psalm 106:28: "They joined themselves to Baal of Peor, and ate sacrifices made to the dead."
Not only were they worshiping another god, but they were committing deeds of sexual immorality. (Numbers 25:1)
Though it is only speculation, their sins may have also involved child sacrifice for both Jeremiah 19:5 and Jeremiah 32:35 mention that this was a common practice in Baal worship and we know from Deuteronomy 12:30-31 that it was performed by the pagan nations at this time.
God thus commanded Moses to battle the Midianites as vengeance for such abominations caused by the plan of Balaam.

"But I have a few things against you, because you have there those who hold the doctrine of Balaam, who taught Balak to put a stumbling block before the children of Israel, to eat things sacrificed to idols, and to commit sexual immorality." Revelation 2:14

THE GREATEST PROPHECY GIVEN BY BALAAM BEFORE HE HANDED HIS SOUL OVER TO GREED:

"A Star shall come out of Jacob; A Scepter shall rise out of Israel, And batter the brow of Moab, And destroy all the sons of tumult ......Out of Jacob One shall have dominion." Numbers 24:17-19

The One, who is a descendant of Jacob, is Jesus Christ!
THE MESSIAH. Our Lord And Savior ^____^
Praise The Lord Jesus Christ