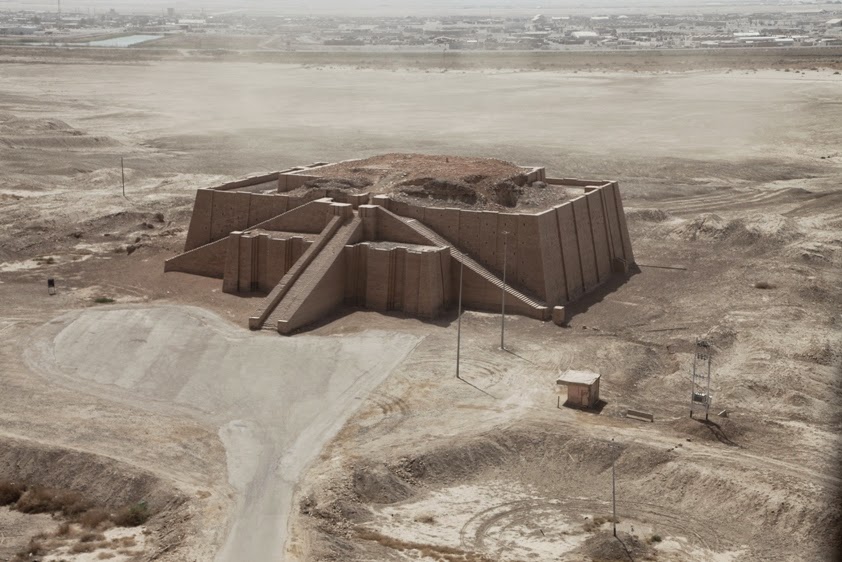 Hello friends! The following is evidence of Abraham's home town, the city of Ur. The picture above is a Ziggurat found at Ur. There have been quite a few discoveries on this site. I will present some of them here, as well as 2 quick videos on the discovery and some of the artifacts found at Ur (Credit given at the bottom of each article :D) 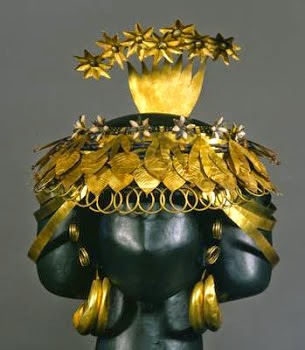 Something i found curious is this headdress found at Ur. It is 3 times the size of a regular human skull. Also notice the earrings.
I believe there's a bit of a cover up with this discovery as it is said that the woman who wore this is only 5 feet tall and that she must have used some sort of wig underneath. 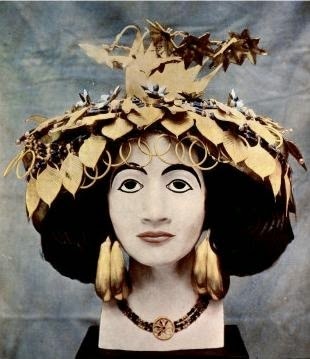 Maybe this is true, but it just doesn't seem likely to me, since God's Word clearly states there were giants back then.
For information on the Giants:
http://bible7evidence.blogspot.com/2014/08/giants-of-old-testament.html

If you look at the artifact above, "Standard of Ur" also found at Ur, there is what appears to be a much taller and larger human/giant in the middle. He's much taller in size, has much broader shoulders, upper body and bigger head compared with the other drawings. Notice how the top of his head breaks the frame of the picture, reflecting his superior size compared to everyone else.
This giant also seems to be leading the people behind him and meeting a different people; who appear to be frightened on the first frame, and it seems some are being murdered, and some are being enslaved on the second and third frame.

Royal Tombs of Ur

The City of Ur

Why was the discovery of the city of Ur such an important find? The city of Ur was important, not only because it produced many valuable artifacts of extreme antiquity (including an inscription bearing the name of Belshazzar, the king of Daniel chapter 5), but also because it is the birthplace of the patriarch Abraham. The city of Ur is mentioned four times by name in the Old Testament, three times in the book of Genesis and once in the book of Nehemiah.

In Genesis 11; verses 28 and 31 we read, "Haran died in the presence of his father Terah in the land of his birth, in Ur of the Chaldeans. …Terah took Abram his son [i.e. Abraham; see Nehemiah 9:7 below], and Lot the son of Haran, his grandson, and Sarai his daughter-in-law, his son Abram's wife; and they went out together from Ur of the Chaldeans in order to enter the land of Canaan; and they went as far as Haran, and settled there."

Again in Genesis 15 we read of God saying to Abraham, "I am the LORD who brought you out of Ur of the Chaldeans, to give you this land to possess it" (Genesis 15:7).

And finally, in Nehemiah chapter 9, in a prayer to God we read, "You are the LORD God, who chose Abram and brought him out from Ur of the Chaldees, and gave him the name Abraham" (Nehemiah 9:7).

The remains of Ur are called today "Tell el-Mukayyar" and can be found near the city of Nasiriyah, south of Baghdad in modern day Iraq. 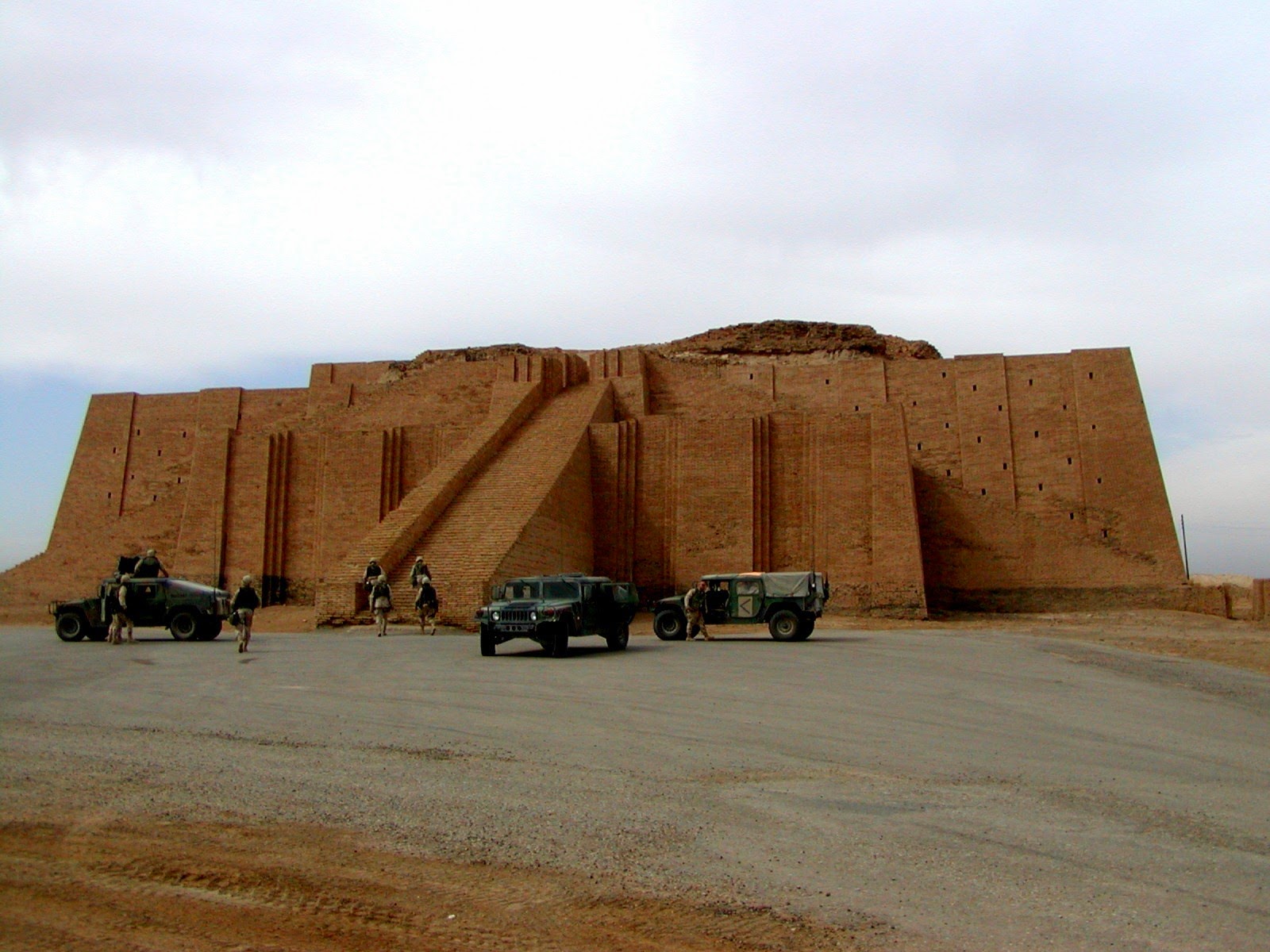 Archaeologists’ Discovery May Be in Abraham’s Home City of Ur

“Terah took Abram his son, and Lot…and Sarai… from Ur…to go to the land of Canaan.” No one has ever found Ur – until now, with a “breathtaking find” of a 4,000-year-old public building near Ur. 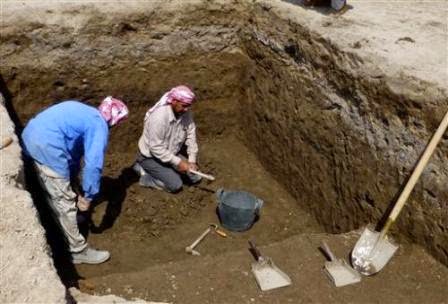 Excavation in progress at Tell Khaiber, Iraq
Photo Credit: Manchester University professor Stuart Campbell
British archaeologists have discovered a huge 4,000-year-old building that probably was in use in the ancient city of Ur, where the forefather Abraham lived before leaving with his father Terah for Israel, then known in the Bible as “the land of Canaan.”
The ancient city of Ur was discovered approximately 90 years ago and is thought to be Abraham’s birthplace, but the latest discovery is the first time a building has been unearthed that might be connected with the city or have religious connections to it.
The unearthing of the large structure, approximately 260 feet on each side, includes several rooms around a large courtyard.
“It might be an administrative building, it might have religious connections or controlling goods to the city of Ur,” Manchester University archaeologist Stuart Campbell told the Associated Press.
Among the artifacts discovered were signs of idol worship, which also was prevalent in Canaan until Abraham introduce the concept of one Deity to the world.
Iraq is known to host a wealth of history underground but has not been accessible to Western archaeologists for more than three decades because of the tyrannical regime of Saddam Hussein and ensuing wars.
One of the images that was found is that of a ram, the animal that Abraham sacrificed in Canaan after God “tested” him with His order to sacrifice his only son. Yitzchak (Isaac), who was to inherit the land for future generations of Jews, as written in the Bible:
“And Abraham stretched out his arm and took the knife to slaughter his son, and the angel of God called from the heavens and said, Abraham, Abraham…. Do not stretch forth your hand to the lad, nor do the slightest thing to him, for now I know that you are a God fearing man, and you did not withhold your son, your only one, from Me.
“And Abraham lifted up his eyes and saw a ram caught in a thicket by its horns and Abraham went and took the ram and offered it as a burnt offering instead of his son.”
Source: http://www.jewishpress.com/news/archaeologists-discovery-may-be-abrahams-home-city-of-ur/2013/04/05/

Royal Tombs of Ur 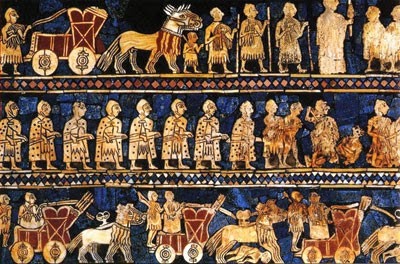 Leonard Woolley’s excavations at the ancient Sumerian city of Ur in southern Iraq – or Mesopotomia, ‘the land between the two rivers’, as it was then known – lasted from 1922 to 1934. At the end of the 1926 season, working on a cemetery site containing some 2,500 burials, the excavators uncovered a deep shaft, at the foot of which lay a gold dagger with a hilt of lapis lazuli, and a gold sheath, along with a hoard of copper weapons and a set of little toilet instruments. Nothing of this quality and date had ever been found before in Mesopotamian archaeology.

Work in subsequent seasons revealed 16 burials of exceptional wealth. These ‘Royal Tombs’ comprised sunken stone chambers with vaulted roofs, approached down steep ramps cut into the earth. Most had been robbed, but even these often still contained extraordinary treasures, like the ‘Standard of Ur’; made up of mosaic panels of lapis lazuli and mother-of-pearl, it had once formed the sides of the sound- box of a lyre. One rich tomb, that of Queen Puabi (known from a seal buried with her), was found intact. The evidence of this and some of the other tombs revealed an elaborate funerary ritual involving human sacrifice on a mass scale. Woolley talked of ‘the death-pits of Ur’.
The Royal Tombs of Ur described

The grave-goods of the Early Dynastic rulers of Ur were of two kinds. An abundance of rich artefacts signalled their status and equipped them for the afterlife: as well as the golden dagger and the sound-box mosaics, there were two statuettes of a male goat with its forelegs resting on a tree, executed in gold and lapis lazuli; a lyre adorned with a golden bull’s head; gold and silver vessels; jewellery of precious metals and semi-precious stones; a diadem of golden leaves and rosettes; and such lesser items as helmets, weapons, and other war-gear.


More shocking, however, was the presence of attendants. ‘The burial of the kings,’ explained Woolley, ‘was accompanied by human sacrifice on a lavish scale, the bottom of the grave-pit being crowded with the bodies of men and women who seemed to have been brought down here and butchered where they stood. In one grave, the soldiers of the guard, wearing copper helmets and carrying spears, lie at the foot of the steep ramp that led down into the grave; against the end of the tomb chamber are nine ladies of the court with elaborate golden head-dresses; in front of the entrance are drawn up two heavy four-wheeled carts with three bullocks harnessed to each other, and the driver’s bones lie in the carts, and grooms are by the heads of the animals.’
The Royal Tombs of Ur assessed

The richness of the tombs and the grotesque funerary ritual represented by them shed a sharp new light on the origins of civilization in Ancient Mesopotamia. The implication was of a complex and highly stratified society in which an exceptionally wealthy and powerful elite had been elevated above society to almost god-like status. The range of materials used in the fashioning of artifacts implied wide trade contacts, and the craftsmanship embodied in the objects bore testimony to a hitherto unsuspected level of skill and artistry. This was also, however, a brutal and militaristic society. War-gear featured prominently among the grave-goods, but most striking in this respect were the images depicted on the Standard of Ur, which shows Sumerian charioteers riding down fleeing enemies, Sumerian spear-men leading naked captives before them, and the Sumerian king receiving these unfortunate victims of his army’s prowess. From the underground chambers of the Royal Tombs emerged a picture of a civilization that was at once dazzling and sinister.


Source: http://www.world-archaeology.com/great-discoveries/royal-tombs-of-ur.htm
Posted by Unknown at 1:40 AM