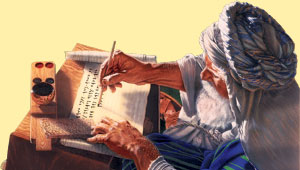 Hello friends! The following is evidence of Gemariah, son of Shaphan. Gemariah is another scribe mentioned in The Book of Jeremiah.
Unlike Baruch's evidence (Baruch is also mentioned in Jeremiah) the Gemariah evidence does not have opposition. (Credit given at the bottom of the article :D) 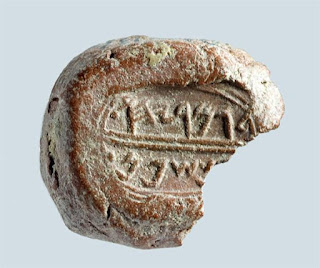 Unlike the bullae of Baruch and Yerahme’el, no doubt exists as to the authenticity of this bulla, which the late Yigal Shiloh excavated along with 50 others in the City of David. It reads: “Belonging to Gemaryahu / son of Shaphan.” Found in a stratum that securely dates it to shortly before the Babylonian conquest of Jerusalem in 587 / 586 B.C.E., about the same time as the events described in Jeremiah 36, this bulla can be identified with the Biblical Gemariah, mentioned in Jeremiah 36:10: “Baruch read the words of Jeremiah from the scroll, in the house of the Lord, in the chamber of Gemariah the son of Shaphan the scribe … ” The contraction of Gemaryahu to Gemariah parallels the contraction of Neriyahu to Neriah in Baruch’s seal.

Source: http://cojs.org/cojswiki/index.php/Gemaryahu_Son_of_Shaphan_Bulla,_586_BCE
Posted by Unknown at 7:10 AM