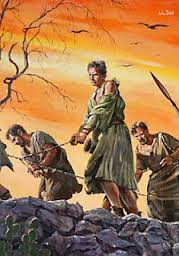 Hello friends! The following is evidence of King Hoshea, who was the last king of Israel before it was captured by the Assyrians.
King Hoshea did not do what was right in The Sight Of The Lord and became a prisoner as a result along with Israel, due to their rebelliousness (Credit given at the bottom of the article :D) "Belonging to Abdi servant of Hoshea."

Remember your memorized Old Testament dates? 722 B.C. come to mind? The ... Captivity . . . of . . . Israel by the . . . Assyrians? OK who was Northern Israel's last king? Hoshea! He reigned circa 731 to 722 B.C. when his nation fell. You can read about that in 2 Kings 17, and it took place during the times of Isaiah, Hosea, and Micah, who also speak of northern Israel's sin and captivity.

Recently a seal, used to stamp official documents, came to auction at Sotheby's in New York. In the "Antiquities and Islamic Works of Art," it was dated to the ninth to seventh centuries B.C. It was also there misidentified as Phoenician and estimated to bring $1200 to $1800 at auction. The pictures in the catalog were clear enough to bring more, for it was actually purchased for $80,000 in December 1993. Shlomo Moussaieff, an Israeli collector from London, had purchased it.

What did he get? The royal seal of King Hoshea's servant Abdi' whose longer name was probably Obadiah (not the prophet). In this case "servant" would be like "minister" in many governments, or "secretary of . . ." in the U.S. This seal is from that 732-722 B.C. time period. It would be used to establish something as official from the king or his servant by pressing their seal into soft clay or wax. This would leave an official impression, similar in purpose as a notary's stamp does for us today.

The seal was described by Andre Lemaire in the Biblical Archaeology Review: "The seal is translucent and brown carnelian or rather orange chalcedony according to an expert gemologist scaraboid in shape [like a scarab beetle spw] and perforated from top to bottom so that it might eventually be work around the neck on a string or mounted. It is one inch high, slightly over one-half inch wide and one-third inch thick" (November/December 1995, 49). There is a picture of a man walking, with his face at a profile. He is wearing a long kilt, and a short wig, and holds a scepter identified as a papyrus scepter. There are a few Egyptian-style marks, popular on many things in antiquity; notably a winged-sun where the name would normally have been. Perhaps this was especially used to curry favor with the Egyptians when Israel was trying to avoid becoming a vessel to Assyria (see 2 Kings 17:4 and Hos. 7:11).

The wording, which identifies it as relating to Bible times is on both sides of the man. It reads: L'BDY `BD HWSH', "Belonging to Abdi servant of Hoshea." The style of lettering is Old Hebrew (paleo-Hebrew) and matches this period of time, as it can be compared with other inscriptions, such as the Siloam tunnel inscription in the time of Judah's king Hezekiah. In addition to God's providence, it was probably this tunnel that saved Jerusalem from Assyrian capture at the same time of Israel's fall (see 2 Kings 18: 17, 27, 31; 19:23-24; 20:20).

A couple of other archaeological points. One, though the seal did have one at auction, the new owner also obtained a housing for seals, and it is believed that this may be the very housing box for the Abdi' seal. It was a 2-inch wide gold mounting that would hold the seal when in use. Both seal and housing are pictured on the cover of BAR.

Secondly, Lemaire wrote of other seals in the article. One from the eighth century B.C., and was made of amethyst, and the owner's name was Habli. This Habli-seal has enough points comparison to make Lemaire think both seals were made in the very same workshop, and possibly even by the same artist. Lemaire suggested it was a shop in Samaria.

Ultimately, Samaria which had become the capital of northern Israel fell to the Assyrians. Many were taken away to other lands. People from other lands were moved to Israel. Those left in the land became known as the Samaritans, and would become enemies to Judah and the Jews, even to the time of Jesus. And though history can bring us this "remnant" from the past, the Lord would pre-serve his remnant from "all Israel" such as Paul was in Christ (see Rom. 11:1-5).

Source: http://www.truthmagazine.com/archives/volume40/GOT040074a.html
Posted by Unknown at 6:11 AM